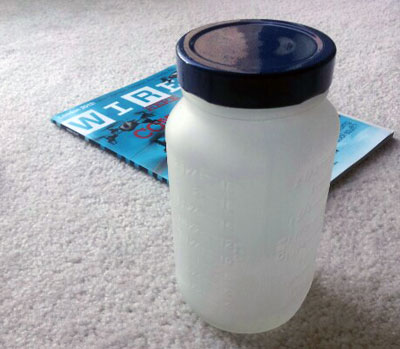 I decided I need a patio light for evenings spent hanging out on the balcony. A proper lantern would have been a bit much, and a flashlight wasn't quite what I was looking for. So with an old mason jar, four LED's and resistors, and a spare atmega chip sitting on the bench, I decide to just slap one together.

The bottle was sprayed with typical glass frost spray paint. The lid was done with a few coats of blue, just to hide the product labeling. Obviously an arduino board would've been a big waste of resources, and while admittedly an atmega328 is too, I decided to just throw what I had together on a leftover square of perforated pcb.

The LED's are arranged at different heights and facing different directions. Each one gets a run through a variation on the sample "fade" sketch included in the arduino IDE, resulting in a firefly sort of effect. I'll throw the code up for anyone that wants it, though it's simple enough that you probably wouldn't need it. :)

I apologize for the poor video, but this should give you some idea of what it looks like when it's running...